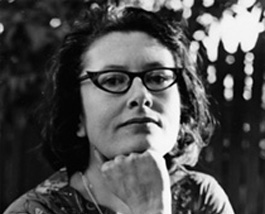 In Thai Binh (Peace) Province for Muriel and Jane, 1972.
by Denise Levertov

I’ve used up all my film on bombed hospitals,
bombed village schools, the scattered
lemon-yellow cocoons at the bombed silk-factory,
and for the moment all my tears too
are used up, having seen today
yet another child with its feet blown off,
a girl, this one, eleven years old,
patient and bewildered in her home, a fragile
small house of mud bricks among rice fields.
So I’ll use my dry burning eyes
to photograph within me
dark sails of the riverboats,
warm slant of afternoon light
apricot on the brown, swift, wide river,
village towers – church and pagoda – on the far shore,
and a boy and small bird both
perched, relaxed, on a quietly grazing
buffalo.                   Peace within the
long war.
It is that life, unhurried, sure, persistent,
I must bring home when I try to bring
the war home,
Child, river, light.
Here the future, fabled bird
that has migrated away from America,
nests, and breeds, and sings,
common as any sparrow.

1)  Did the people of Vietnam
use lanterns of stone?
2)  Did they hold ceremonies
to reverence the opening of buds?
3)  Were they inclined to quiet laughter?
4)  Did they use bone and ivory,
jade and silver, for ornament?
5)  Had they an epic poem?
6)  Did they distinguish between speech and singing?

1)  Sir, their light hearts turned to stone.
It is not remembered whether in gardens
stone lanterns illumined pleasant ways.
2)  Perhaps they gathered once to delight in blossom,
but after the children were killed
there were no more buds.
3)  Sir, laughter is bitter to the burned mouth.
4)  A dream ago, perhaps.  Ornament is for joy.
All the bones were charred.
5)  It is not remembered.  Remember,
most were peasants, their life
was in rice and bamboo.
When peaceful clouds were reflected in the paddies
and the water buffalo stepped surely along terraces,
maybe fathers told their sons odd tales.
When bombs smashed those mirrors
there was time only to scream.
6)  There is an echo yet
of their speech which was like a song.
It was reported their singing resembled
the flight of moths in moonlight.
Who can say?  It is silent now.

I liked this review of Levertov’s literary influences.

Because Levertov never received a formal education, her earliest literary influences can be traced to her home life in Ilford, England, a suburb of London. Levertov and her older sister, Olga, were educated by their Welsh mother, Beatrice Adelaide Spooner-Jones, until the age of thirteen. The girls further received sporadic religious training from their father, Paul Philip Levertoff, a Russian Jew who converted to Christianity and subsequently moved to England and became an Anglican minister. In the Dictionary of Literary Biography, Carolyn Matalene explained that “the education [Levertov] did receive seems, like Robert Browning‘s, made to order. Her mother read aloud to the family the great works of nineteenth-century fiction, and she read poetry, especially the lyrics of Tennyson. . . . Her father, a prolific writer in Hebrew, Russian, German, and English, used to buy secondhand books by the lot to obtain particular volumes. Levertov grew up surrounded by books and people talking about them in many languages.” It has been said that many of Levertov’s readers favor her lack of formal education because they see it as an impetus to verse that is consistently clear, precise, and accessible. According to Earnshaw, “Levertov seems never to have had to shake loose from an academic style of extreme ellipses and literary allusion, the self-conscious obscurity that the Provencal poets called ‘closed.’”